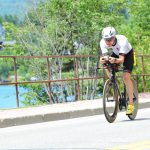 Husband to Anna and father to Valencia (12 y.o.), ex-officer and now-engineer, consultant and project manager and a passionate triathlete. We live in house in Örby in the south parts of Stockholm.

What is your training/competition background?

An old drunken bet made me register for Vasaloppet in 2010. My training background before that was practically zero for many years. I was a bit overweight and suffered quite much from a chronic rheumatic disease. Vasaloppet was a terrible experience. Although I was really beat down right afterwards, an older gentleman managed to convince me that Vätternrundan was a good idea. A couple of weeks later I bought my first road bike and fell in love with cycling almost immediately. Even though my swimming skills (also) was non-existent I decided to try a sprint triathlon later the same summer and after crossing the finish line I set a long-term goal of doing an Ironman before I turned 40. And the rest is history 🙂

Come 2017 I have done 5 IM:s, 16 HIM:s and numerous others long-distance events. I have competed in Sweden, Europe, Asia and North America. I have raced the National in various disciplines. If someone would have told me this 10 years ago, I would have considered him/her to be a total lunatic.

What made you register?

Back in 2013 when the race was announced I almost immediately realized that this is a race that I’m going to participate in, eventually. When I started planning the 2017 season I figured that this might be the year; my long-time goal is Kona and this season I’m oldest in the M40-44 AG which isn’t the best pre-requisite for getting a spot. So, I decided that 2017 is going to be a year of bucket-list-stuff and a year where the focus will be on running and endurance. Unfortunately, I suffer from some kind of registration Tourette’s, and before I knew it I was also registered for IM Austria (3 weeks before UltraTri) and IM Kalmar (4 weeks after UltraTri). It’s going to be an interesting summer.

What do you long for the most come July 2017 and UltraTri Sweden?

I long for the starting line and the wobbly sensation in the stomach just before taking off. I long for getting out of the water and start my best discipline, the bike ride. But most of all I long for my wife and daughter meeting up in Farsta on Sunday and follow me to the finish line.